Piet Stockmans’ porcelain are the tableware of choice for acclaimed chefs

At 78 years young, Piet Stockmans has no plans to retire from the job he loves. Together with daughter Widukind and son-in-law Frank, he still works on the creative side of his porcelain collection while they handle the commercial and business side. Since they are all designers, the business has developed substantially over the years. The interest generated from the hotel, restaurant and catering business has played an important role in this evolution. Well-known chefs like Sergio Herman, Peter Goossens, Thierry Theys and Ralf Berendsen have chosen Studio Pieter Stockmans porcelain to display their creations for years. The Dew collection – for the fans: the white set with dots – was one particular success. A number of top chefs including Simon Taxacher (Rosengarten, Kirchberg), Massimo Bottura (Osteria Francescana, Modena, number two in the world), Thomas Bühner (La Vie, Osnabrück) and Hans van Wolde (Beluga, Maastricht) are all loyal customers. 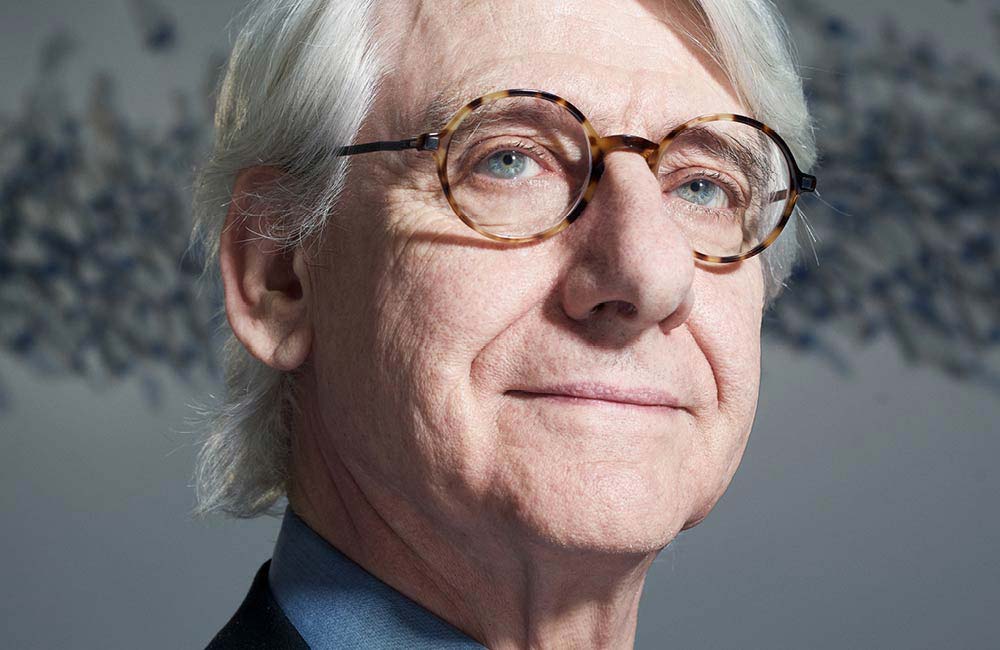 Piet’s gastronomic success story began in 2005, when he received a call from Alain Ducasse. The French godfather of haute-cuisine, who has 30 restaurants in France, Monaco, the United Kingdom, the USA, Japan, the Middle East and Hong Kong, wanted to order a dessert service for exquisite 3-star Michelin restaurant Le Louis XV in Monte Carlo.

‘A few years before, Alain had purchased one of my pieces in New York and later on one of my books as well’, Piet Stockmans recalls. ‘It seemed that he was impressed by the tactile character of my pieces – and the blue accent colour, which reminded him of the Mediterranean. He called me several times to establish initial contact. Ultimately, the design came into existence in collaboration with Olivier Berger, his pastry maker.’

‘The creative starting point for the service was the Modus Vivendi collection that I designed in the Eighties. That was the beginning of a completely personalised service – including the Alain Ducasse stamp on the underside of each piece. We not only created cups and saucers, but also the bonbonnières, little pots for teas and so on. In total there were 60 different designs, and we made 40 pieces of each model.’

Porcelain fit for a prince!

The gourmet Restaurant La Source at Domaine La Butte aux Bois in Lanaken holds two Michelin stars and a Gault&Millau score of 17 out of 20 points, and is one of Belgium’s 40 best restaurants. Chef Ralf Berendsen serves the finest haute cuisine creations to prove that opposites attract, and that global culinary influences can come together in perfect harmony. Gourmets make regular pilgrimages to the award-winning restaurant in Lanaken to indulge in the chef’s signature dishes.

If this story has got you interested in starting your journey with Niche Destinations, please enquire here.

A WORLD OF STORIES

Back to the Stories ….

If this story has got you interested in starting your journey with Niche Destinations, please enquire here.

A WORLD OF STORIES